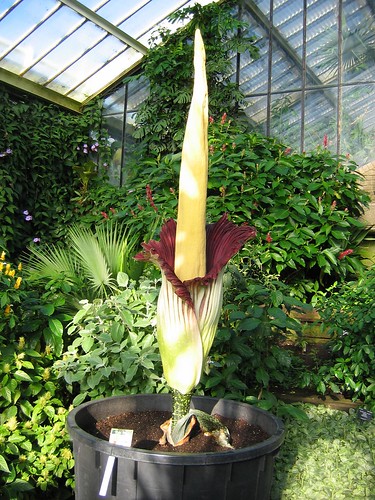 The ‘Titan Arum’, is due to bloom in Kew Gardens, just outside of London, in the next few days! Blooming only once every 6-7 years, it emits a phenomenal stench that has been likened to rotten flesh, hence it’s nickname the ‘Corpse Flower’, given by its native country, Indonesia. Amazingly, there are two seperate plants due to bloom at the same time, so you’ll be in for a stinking experience!

This special plant can grow over 3 metres tall and is related, suprisingly, to the tiny in comparison cuckoo pint and calla lily! These phallic plants produce pink and cream flowers while blooming and when they are ready to begin pollinating, they begin to emit the awful smell that it has become famous for. This ‘fragrance’ is released to invite carrion-eating beetles and flesh flies to pollinate the plant. The spadix’s warmth also increases to match human body temperature, which is believed by scientists that it assists the illusion that helps attract flesh eating insects.

The Royal Botanic Gardens in Kew, homes 12 of these stomach turning flowers in the Princess of Wales Conservatory, amongst many other tropical varieties, so if enduring these foul smells isn’t something you’re too keen on, you may want to consider visiting their other areas while the kids witness these striking plants in action!