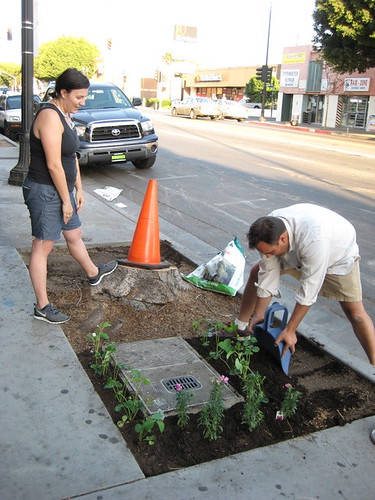 Guerillagardening.org has been operating for many years. It’s origins in UK date back to 1970. Their aim is to dig up neglected areas in populated places, for example, roadsides or traffic islands, and sow flower seeds, creating beautiful scenery for passers by and taking responsibility for the open, disused land around them.

Despite the fact Guerrilla Gardeners are voluntarily creating these beautiful displays, it is indeed against the law to plant seeds without permission and often these two paths meet. While it is unlikely that one would be arrested committing such a ‘crime’, often police will ask them to move on. Consequently, digging and planting often has to be delayed by a few hours or even days.

The Guerrilla Gardeners latest project is to take plants and other used material from the Chelsea Flower show in protest and design an area in the disused land in Sipson, without the permission of the local council, where Heathrow is planning to build its third runway.

Garden designer Tom Hoblyn, who is donating plants from his silver-award-winning garden has said, “Expanding airports, such as Heathrow, will only encourage more aviation, which will only increase CO2 levels, taken in isolation, this initiative makes absolutely no sense. My hope is that the plans will be dropped and that the plants that go to Sipson will be allowed to thrive for generations to come.”

But will these efforts be enough to stop Heathrow’s expansion? Terminal 5 was heavily protested against yet still went ahead. These plans were made despite the recession and a continuing growth in environmental awareness: according to government statistics, 2007 saw a record high number of international travellers. The only note-worthy dip in this ever increasing number is during the 1974 recession. Going on previous figures, the number of international travellers will only increase further and often when there is money involved, there is nothing to stop it.

While Guerrilla Gardening efforts are most definitely appreciated in most locations, it’s unfortunately unlikely that they will be able to stop another runway being built. The runway will be needed to accommodate the raising levels of international travel. It also provides many jobs for people in times where jobs are unavailable and puts money back into the economy, where it is most needed.

Quotes taken from the Daily Telegraph 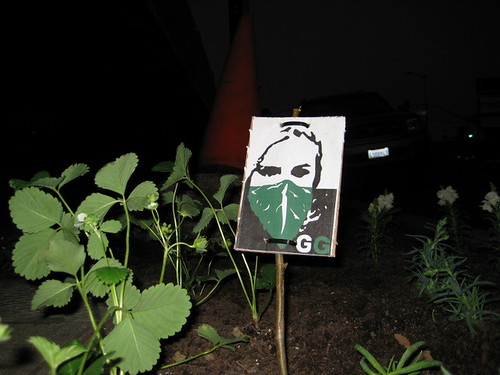 Guerrilla Gardeners was last modified: May 30th, 2009 by admin
The following two tabs change content below.